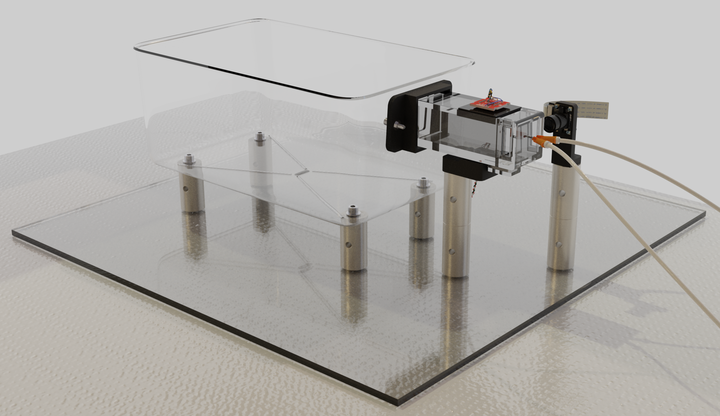 PiDose is an open-source tool for scientists performing drug administration experiments with mice. It allows for automated daily oral dosing of mice over long time periods (weeks to months) without the need for experimenter interaction and handling. To accomplish this, a small 3D-printed chamber is mounted adjacent to a regular mouse home-cage, with an opening in the cage to allow animals to freely access the chamber.

The chamber is supported by a load cell, and does not contact the cage but sits directly next to the entrance opening. Prior to treatment, mice have a small RFID capsule implanted subcutaneously, and when they enter the chamber they are detected by an RFID reader. While the mouse is in the chamber, readings are taken from the load cell in order to determine the mouse’s bodyweight. At the opposite end of the chamber from the entrance, a nose-poke port accesses a spout which dispenses drops from two separate liquid reservoirs. This spout is wired to a capacitive touch sensor controller in order to detect licks, and delivers liquid drops in response to licking.

Each day, an average weight is calculated for each mouse and a drug dosage is determined based on this. When a mouse licks at the spout it dispenses either regular drinking water or a drop of drug solution depending on if they have received their daily dosage or not. All components are controlled by a Python script running on a Raspberry Pi.